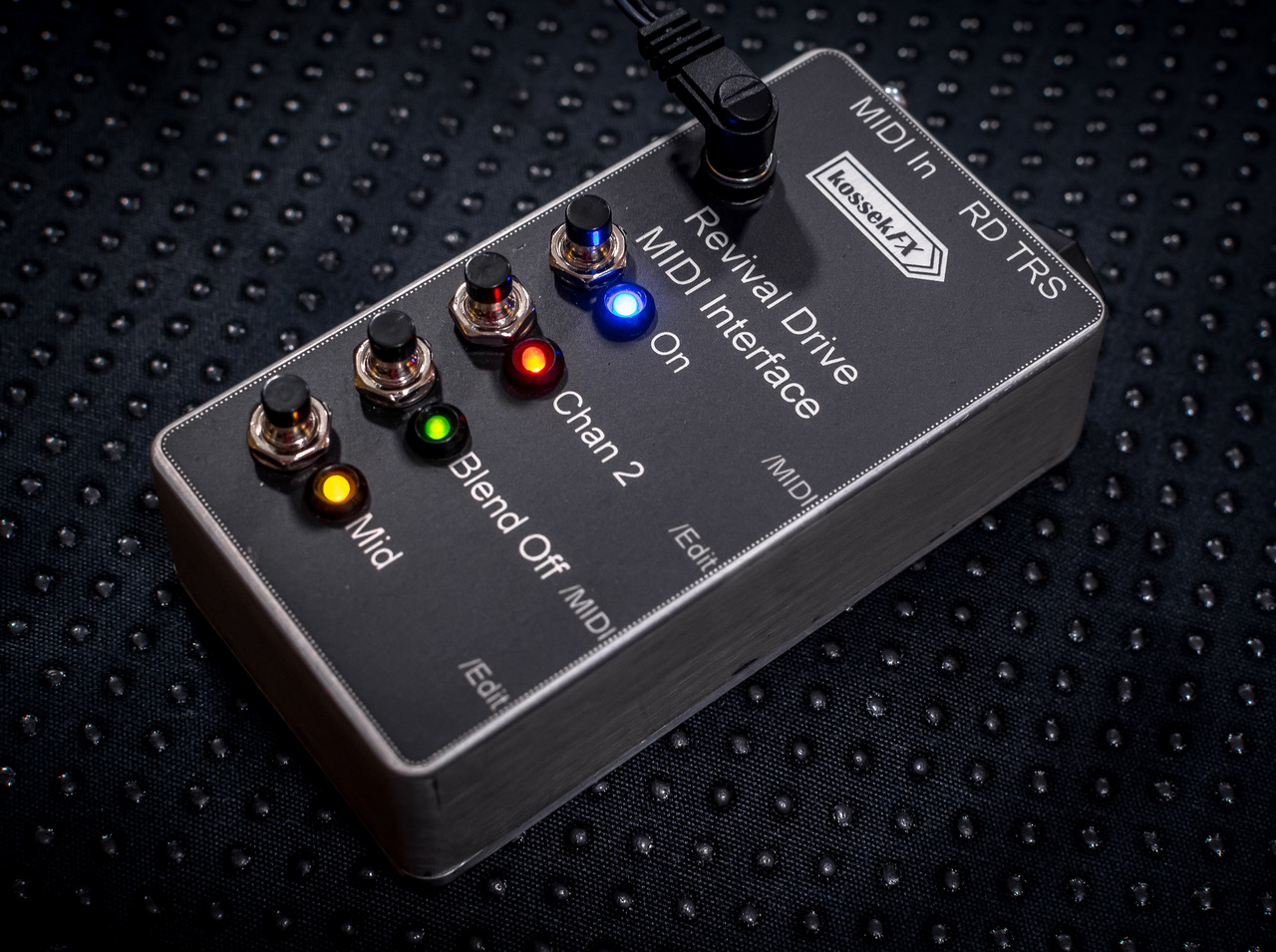 Recently I purchased the Revival Drive from Origin Effects. I was instantly blown away. This pedal is in another league than any other overdrive pedal I’ve ever tried. After a few minutes playing I knew it would be my new first choice of overdrives. I had to figure out a way to get the most out of its potential after placing it in my board. First I got the special TRS cable (made for me by Peter Kossek) so I could access the Blend overwrite and Mid boost with the TRS controls on my G2 from  GigRig – it worked perfectly.  But shortly after I missed the option of channel switching on the Revival Drive when I was changing presets on my G2.

While I had been exploring the Revival Drive, Peter Kossek had been developing a Midi Interface solving the challenge.

Last week I got it the Midi Interface for the Revival Drive – a special version for me with the power connection on top of it. That way it could hide in a corner under the tier on my board from Custom Pedal Boards.

So easy, so convenient 🙂

Below you get some of the technical stuff … guess it could be interested since it’s so new on the market. If the Revival Drive is new to you please read here. 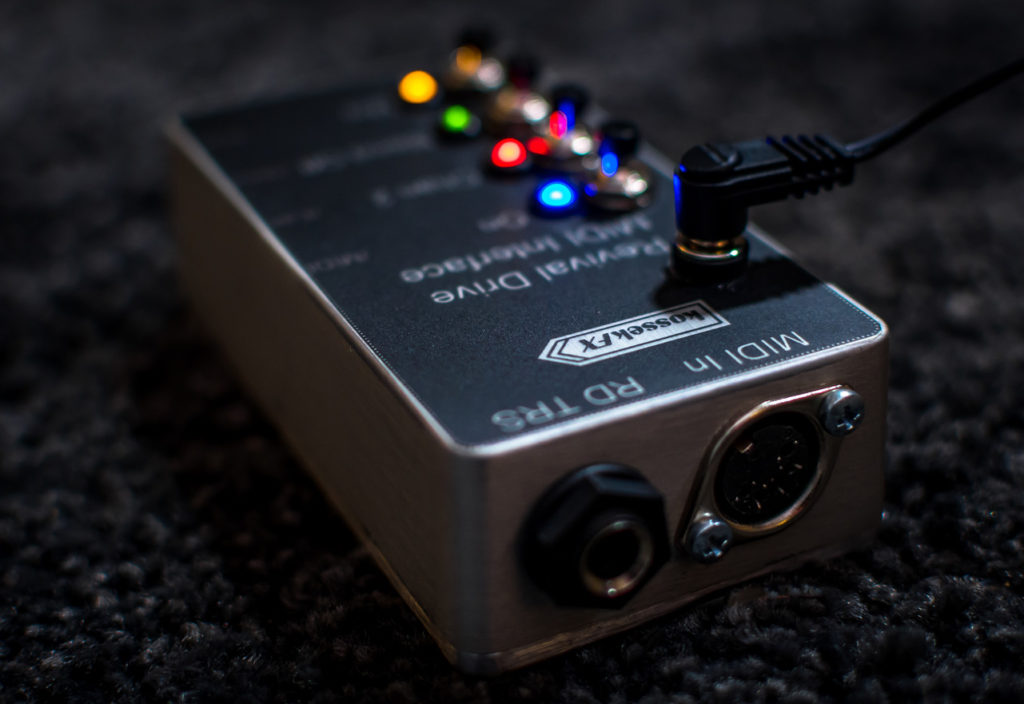 The Kossek FX’s Midi Interface for the Revival Drive

The RD MIDI IF is a compact MIDI interface to control Bypass, Channel selection, Blend override and engage the Mid boost functions of the Origin Effects Revival Drive. 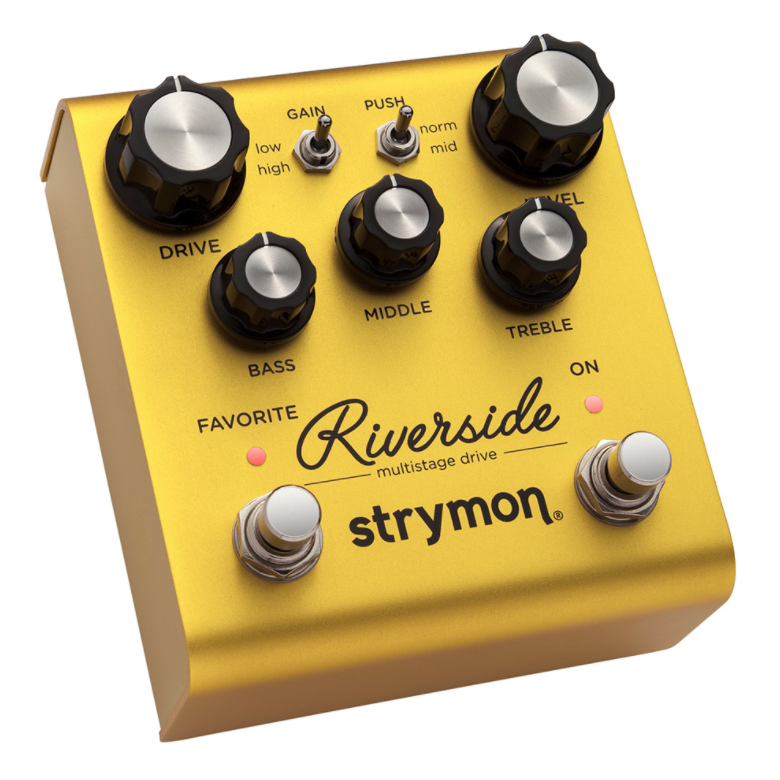 Reading the specs tells me it has everything I need. Having several other Strymon products, that I really like, almost made me buy the pedal without playing it. Fortunately I decided go check it out and I’m glad I did.

I saw every video available with the Strymon Riverside Multistage Drive, before I went to pick it up. The style/sound is a great alternative to the two other overdrives I have in my board (an Euphoria and the Plexi Drive Deluxe from Wampler), so I was really turned on.

It’s a really well made pedal. Some super cool features. Actually it has everything I’m looking for. There is room in my board for it. I have the bread and yet I didn’t buy … that’s scary!

Here’s why and please share your thoughts on this, maybe I’ve missed something.

END_OF_DOCUMENT_TOKEN_TO_BE_REPLACED

First of all: let’s make something VERY clear – I’m no technician … I don’t know much about what’s going on inside my amps, pedals and stuff. I’m a pro guitar player who is really serious about how my set-up sounds. And even though I have many years experience with this, I still get surprised. Here are some experiences that might save you some problems with hum.

I was ready to mount everything to my board. I will describe all my pedals as average or above. The power supply – the Ciokolate is awesome. I had the order of the pedals and had decided what outputs I should use on the Ciokolate. The pedals got the right voltage and the right current. I used the right cables so the polarity was ok and they all were on an isolated outputs. It should be working – and it did!!

But I noticed some seriously hum from my Plexi Drive deluxe.

END_OF_DOCUMENT_TOKEN_TO_BE_REPLACED

Here’s something about the pedals and how the signal runs thru my pedal board 2016.

END_OF_DOCUMENT_TOKEN_TO_BE_REPLACED

The Cioks Ciokolate is a serious and professional power supply – strong as an elephant, available to adapt to different surroundings just as many human beings … and delicious (at least for us guitar players) as a candy bar.

Why should I buy a new power supply?

It makes sense to ask me that, since I’ve written several posts about how fond I am of the Pussy power supply (also made by Cioks). When I returned from the oversea trip, I did with my new smaller board, I wanted to use my bigger board for the final recordings for my coming album. Suddenly I remembered that I stole the Pussy Power from that board right before I left for Canada. Since I’m very happy about my new smaller board, and have no intentions of letting it go, I needed a new power supply for my old board. I was just about to order another Pussy Power, when I remembered something.

END_OF_DOCUMENT_TOKEN_TO_BE_REPLACED

An additional experience with the Cioks Pussy power supply

This summer I was invited to come to Canada and play with the great saxophone player Walle Larsson and his band. Since I had to travel overseas I had to resize my pedalboard and make some serious decisions about what to bring and what to leave at home.

Since I’ve been into racks for years I haven’t traveled overseas with a pedalboard before. I’ve heard from several friends that the solution often is batteries to avoid troubles with hum, but since I wanted to bring pedals that needed more power than 9 volts I had to find the a good solution. The solution wasn’t that far away … I looked at my big board, flipped it upside down and looked at my Pussy power supply … it took about five seconds to find the switch that made it possible to work with 120 V main voltage as well. It had all I needed for my new board – isolated sections, 9-15 volts, some of the sections with 400mA and a weight about one kilo … all I needed. (Actually it can deliver up to 24v if you need that!). A few minutes after I started mounting the Pussy power at my new and smaller board. I put some extra power chords in my suitcase, since I would receive the last pedals at my hotel in Canada and headed for the airport … ok, I did this some days in advance of my flight … I like to be organized 🙂

END_OF_DOCUMENT_TOKEN_TO_BE_REPLACED

What does the Empress buffer+ do, and do I really need a buffer? … I mean there are several interesting pedals out there that can do some really exiting stuff, so why spend money on a pedal that doesn’t add a wild distortion or other ‘stuff’ to your sound? Well let me try to tell you about my experiences with buffers and why I just got the Empress buffer+.

When I made my pedalboard a couple of years ago I spent hours reading about true bypass, browsing the internet to find the right pedals, cables and jacks. I was very happy and excited about most of the stuff I ended up buying. But I must admit I was confused and disappointed when I finally put everything together and plugged my guitar into the board and amp … what happened to that nice warm and present tone I just had a minute ago, going directly into the amp?

After talking to some of my more nerdy friends who have had boards for years, I was recommended a buffer. Actually a guy in a music store already mentioned a buffer to me, when I was complaining about how all the volume pedals choked the tone while I was trying out all the different brands – and back then I replied that I was looking for one good volume pedal … not a volume pedal AND something to fix it. But now I was a bit more ready to hear about buffers. Again I’m not into all the technical stuff … I just want it to sound good.

Let med try to explain very briefly what a buffer does.

END_OF_DOCUMENT_TOKEN_TO_BE_REPLACED

I got my first delay fix from a Boss pedal in the late 70’s – the same time the Chorus CE-1 entered the market. Shortly after realizing I had a delay-addiction, I started looking for more serious alternatives to the noisy Boss and bought my first rack unit.

Since then I’ve been through a lot of different units. The TC 2290 has been a favorite and the brain/center in my rack-setup for years. A few years ago, when I decided to go for a pedalboard solution instead of the rack. I searched the market for a while and ended up buying the the Empress Vintage Modified Superdelay, which in my opinion, is the best delay pedal around. It sounds awesome, has tons of configurations, and even the ability to save up to eight presets.

Why should I ever consider buying anything else?

END_OF_DOCUMENT_TOKEN_TO_BE_REPLACED

Some years ago, when I decided to go for a pedalboard solution instead of the rack setup that I’ve used for years, I searched the market for quite a while to find the right pedals for my new board. I ended up buying some really good, and unfortunately not cheap, pedals. The upside is that they are reliable and sound awesome, so now I don’t have to worry about purchasing ‘upgrades’ … or? 🙂

Why should I get a new pedalboard?

Well, last year I was invited to play in Canada this summer. When I got a little closer to my trip and started thinking about what to bring, I realized I had to cut down my current pedalboard, if I wanted to avoid spending a fortune on surcharges at the airports. What could I remove?? Actually, I loved my board as it was and didn’t want to lose anything, but I had to let something go. Some tough decisions had to be made, so I started browsing the internet again… and I inevitably ended up checking out what the brands I already used (on my main board) had to offer.

END_OF_DOCUMENT_TOKEN_TO_BE_REPLACED

This review of the Empress Effects Compressor can actually be really short! Here it is: buy it!!

But ok, let me add a little more to this.

When I was teenager I could spent hours in music stores (I actually still can, but time doesn’t allow me any more), checking out new gear, new guitars and new pedals. Back then I was pretty turned of by compressors. I couldn’t hear that big a difference if I turned the pedal on or off … when I had squeezed the knobs for hours to extreme settings and could hear the difference, I didn’t like what the compressors did to the sound … very understandable, so I did never buy any compressor back then. Now, when I know a little more about adjusting compressors and what they are suppose to do things has changed.

END_OF_DOCUMENT_TOKEN_TO_BE_REPLACED

We use cookies to ensure that we give you the best experience on our website. If you continue to use this site we will assume that you are happy with it.OkPrivacy policy