The other day I shared a link on my Facebook profile to a track I did for the american tv-show “Studio Jams”. I’ve played in two full episodes of Studio Jams. This is the story about the first international version of the show I did – recorded in Copenhagen, Denmark.

Several years ago I was contacted by TV-producer Tom Emmi – he was planning a trip to Europe and Scandinavia. Tom had heard about me through keyboard player David Garfield, and Tom wanted to invite me to participate in the first international version of the program Studio Jams.

He described the formular. I saw some samples from earlier Studio Jams and I was totally blown away – it’s some really great shows Tom is doing. Basically it’s a documentary about how musicians work and comunicate when they meet and jam without anything planed in advance. The episodes are shot in a recording studio, so you get the original sound from the instruments thru samples from the rehearsals, but also the recorded and mixed version of the final take of the jammed tune.

If you don’t know the concept you have to check out the Studio Jams site here.

Being on “Studio Jams”

I’ve done many TV-shows thru the years, but this was totally different. Instead of a long day with waiting time for the lights to be right, the sound to be right, the artist to show up for rehearsal … all such things – we were recording/on camera from the sec we met in the studio. We did the whole show within four hours or so. Four hours from we met, checked in, made soundcheck, started to jam and got like five tracks recorded with pictures and everything. That’s kind of fast.

Tom Emmi had also invited drummer Henrik Engqvist for the episode. I met Henrik the first time around 2001 when Henrik invited me to tour with his band together with David Garfield – a really great experience. I’m still SO glad that Henrik asked me to play that tour – a memory for life.

Henrik brought one of his good friends Paul Reimann to the jam. Poul is a real talented keyboard player, that I hadn’t met before. I brought one of my good friends a bass player named Jannik Jensen. Jannik has played in my band on live- and tv-shows for many years. Jannik hadn’t played with neither Henrik or Paul before, I don’t even think they met before we hooked up in the studio. 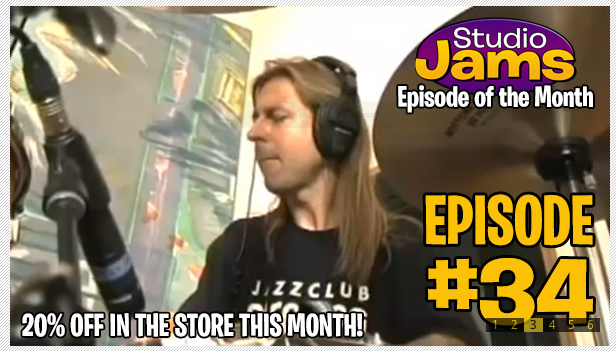 The studio and the recording

The studio we recorded in wasn’t big. The recording room was actually very small. There was no special camera lightning, just some huge windows. It was tricky to find a way where everything could be recorded properly and we could comunicate together between the playing. But somehow everything worked out smoothly and there was room for all our equipment, three camera guys and Tom who was producing the pictures and everything realtime. Since he didn’t knew what we would play (neither did we), he couldn’t plan camera shots or what they should focus at before we started playing. But while we rehearsed the camera guys gave their suggestions to how they should cover this, and with adjustments from Tom, while we talked or rehearsed before the “recording” of each song, they got some real awesome shots.

We ended up doing a couple of standards, one of Pouls songs and two of mine songs: “Childrens song” and “Swedish spring” from the Funky Flavas album.

You can problebly imagine that it was a super great experience to participate in. I was glad when Tom asked me, even happier when we had met and done the show, therefore I became really glad when Tom a couple of years later asked me if I also wanted to do a Swedish version of Studio Jams. Off cause I would – it ended up as another real great memory … and I’ve written about that episode here

Till then you can watch some samples from the first Studio Jams I participated in here.