Some weeks ago I wrote how I got my red ES-346 and after last weeks concerts I got a lot of questions about my honey brown Gibson ES-346 – so I guess it’s appropriate to write something about that one too, so here’s the story.

When I wasn’t playing my new red ES-346 either in the studio or in the couch, I sat and surfed the net to find more info about the model – you know a typical male thing to do after the product is bougth 🙂

Only a few weeks after I bought the red one I found another one for sale! Ok, the model designation in the add was not ES-346, and the materials was not like the ones I wrote about when I told you about my red one, but the photo was of a honey brown Gibson ES-346!

I contacted the seller who lived somewhere in the United States and asked him for details. He held on to it was another model, made by other sorts of woods than my red 346. He also told me that the guitar was made in another year than the serial number indicated. I was very confused and asked him to send more photos of the guitar. The photos all showed a beautiful brown ES-346. I took a deep breath and jumped into it … I bought it too. If it was a ES-346 I could have 0.11’s on my red and 0.10’s on this, that would make everything a lot easier for me.

Now the days felt even longer than when I bought the first one. Would it be a ES-346 or not?

Same postoffice, same postal lady as when I picked up my first ES-346 … just a couple of weeks later. I tell her I’m there to pick up a package from the U.S. and she asks me: “Is it a guitar?” “Yes”, I reply a little confused, how could she know, since I haven’t handled her the papers yet or said anything about it. She replies “Isn’t it a little crooked?” as she pulls a very curved gigbag up from the corner! The seller had sent the guitar all the way from the U.S. to Denmark in a thin nylon gig bag, nothing else! No hard case, no cardboard – nothing but a piece of plastic around the neck with my address! With trembling hands I got the gig bag and ran out of the post office.

I hadn’t the nerve to look into the gigbag in my car – afraid that if it was broken into many pieces and some parts would be lost under the seat or something. When I got home I opened the gigbag with trembling hands.

Apart from the fact that pick guard had fallen off, the guitar had miraculously survived. But the overall impact I got from the guitar wasn’t impressive. The string height was unbelievable high and neck wasn’t well adjusted so it was almost impossible to play, which also meant that the guitar wasn’t played that much. All screws on the pickups, tailpiece and other visible screws were turned so they stood in line and pointed in the same direction. I do not have words to describe how I felt and what emotions that went thru me. It was an ES-346, but at that moment it wasn’t enjoyable to play and I must admit I was disapointed. But with new strings, a screwdriver and a some patience while adjusting everything the potential slowly came forward, and now I’m using this guitar even more than the red one.

I could set my new brown ES-346 up with 0.10’s that I’ve used for years on my other guitars, and make a good blusy bend without worrying about my fingers, and then keep 0.11’s on the red one for a even fuller tone for more jazzy stuff … ahhh.

I must admit that I after a while have done some modifications on the brown on – I’ve changed the pickups to a SD-jazz at the neck position and a SD-JB in the bridge position. They are also wired, so I can split them to single coils for rhythm guitar playing. I also had some small things done, so the tone doesn’t change if I turn the volume down on the guitar, so it ain’t the original electronics anymore … and I’ll plan to have the same mod done to the red one too. 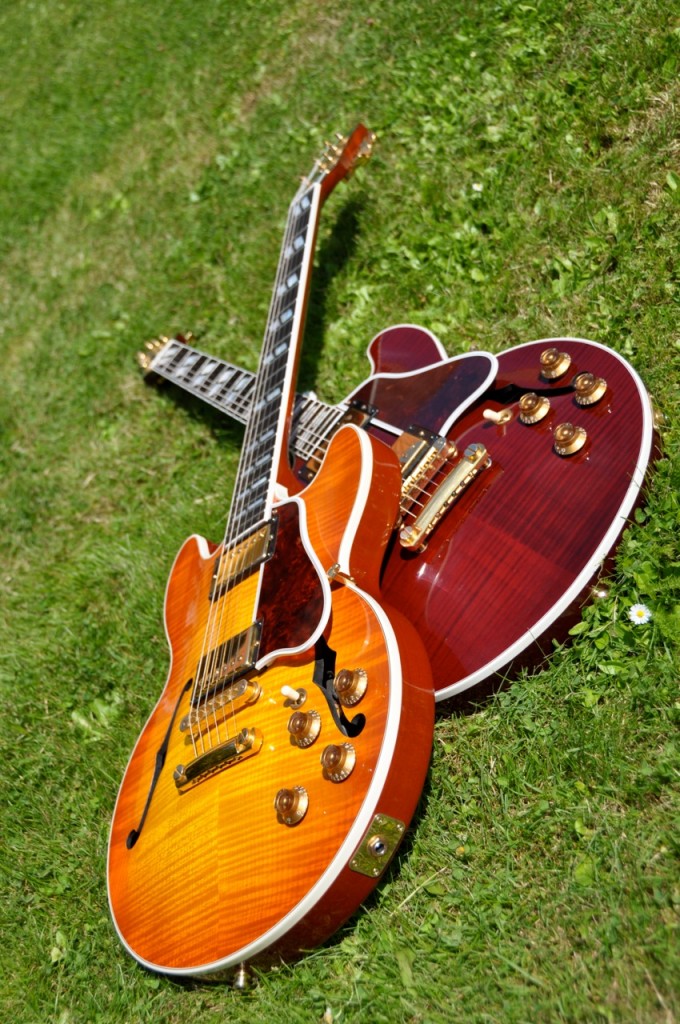 All the very best from a very lucky man