Some time ago I wrote about how I got my old Valley Arts guitar back. As I wrote in that post it was a little weird at first to play that guitar again, but after a few hours, it felt so natural. I couldn’t believe it was ten years since I played that guitar the last time. Today I’ll write about a modification I’ve done to all my guitars with Floyd Rose systems and why I have this tremsetter in my guitars.

One thing that showed me how many hours I have spend with my Valley Arts Guitar back in the nineties, was when I changed the strings after the re-arrival. I took off the old ones, added some new and started tuning up. Without a reference note or tuner in sight I just turned the tuners till it felt right. When I subsequently plugged the guitar into my rig and turned on the tuner, it was in tune – A440 spot on. After ten years it just felt right and was right – nice.

When I had played my old Valley for some hours and decided that I wanted to buy the guitar back, I also decided that I would re-install the tremsetter that I had in the guitar back then. The former owner apparently didn’t like it, since he had removed it, but I must admit I can’t imagine having a Floyd Rose system without a tremsetter as well. It was time to play handyman.

What’s a tremsetter you may ask?

A tremsetter is an “advanced” spring-conctruction you can mount instead of one of the normal springs you have in a Floyd Rose type of tremolo. The tremsetter makes it easier to tune up every time you change strings, stay in tune while you bend one of the notes in a double stop – it even helps you to keep the guitar in tune if you brake a string. 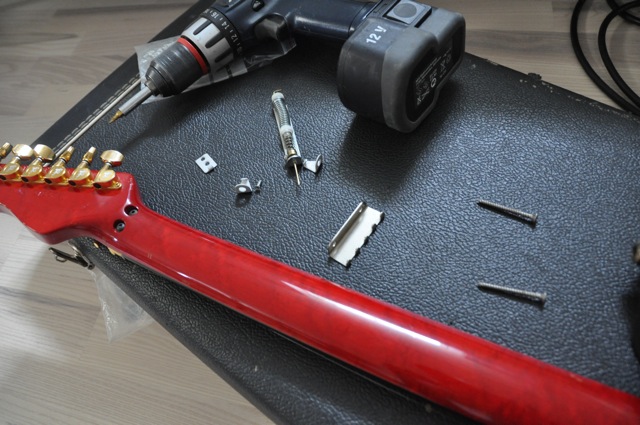 And what do you loose by having a tremsetter installed? To me not much, but of cause it depends on what style you’re playing and how you want to use your tremolo system. A guitar player like Steve Lukather for instance does some great sounding stuff by hitting the whammy arm with his right hand instead of picking the note with his pick. That makes the tremolo do a kind of “fluffy” sound, a very fast and wild tremolo effect. It sounds great and cool, but for my sake it’s more important that my guitar stays in tune while I bend, without me trying to compensate – but again it all depends on what you want to do and what style you are playing.

Is it easy to install a tremsetter?

I’ve never installed any of my tremsetters myself before. Not because it seemed that difficult according the manual – but I was kind of scared of the thought of drilling a hole in a new guitar. The tremsetter might force you to drill a small hole in the guitars body, so the spring can move in both directions. The guy who did the mounting in my first guitar, did it so well (and fast that it didn’t cost a fortune), so I never imagined that I should do it myself. But now, I had a guitar that was prepared for the operation … no need for drilling or measuring since there already was the old hole for the mounting screw too. I gave it a shot myself and a few minutes later it was fixed – and worked as expected.

If you have a guitar with some kind of tremolo system, and have your fights about staying in tune check out the tremsetter, it might help you and solve your problem – it does for me. Once again I can’t imagine having a guitar with a Floyd Rose tremolo, without having a tremsetter installed.

4 Replies to “Tremsetter in my guitar”