When I decided to make myself a pedalboard, I spent hours … actually days or maybe even more correctly weeks researching effect pedals, but didn’t give the power supply much thought. My only concern in that direction was how much power the different models delivered, and if it would be enough power … I should be wiser.

I read about true bypass, I read about the latest releases of pedals and I saw tons of videos on youtube with dedicated people showing their boards. These enthusiastic pedal-lovers were playing the same pedals with different guitars thru different amps, sometimes even comparing different generations of the same pedal.

After some research on the internet, I knew what I wanted to check out myself and I started spending time in music stores with my guitars. After the first round of testing I brought a bounch of pedals to my studio and started trying them there. Normally only one at a time, but sometimes a few together. But not like “everything” together and I did all the testing on batteries … no power supply!!

I ended up with some very nice stuff I think – you can read more about my board here. 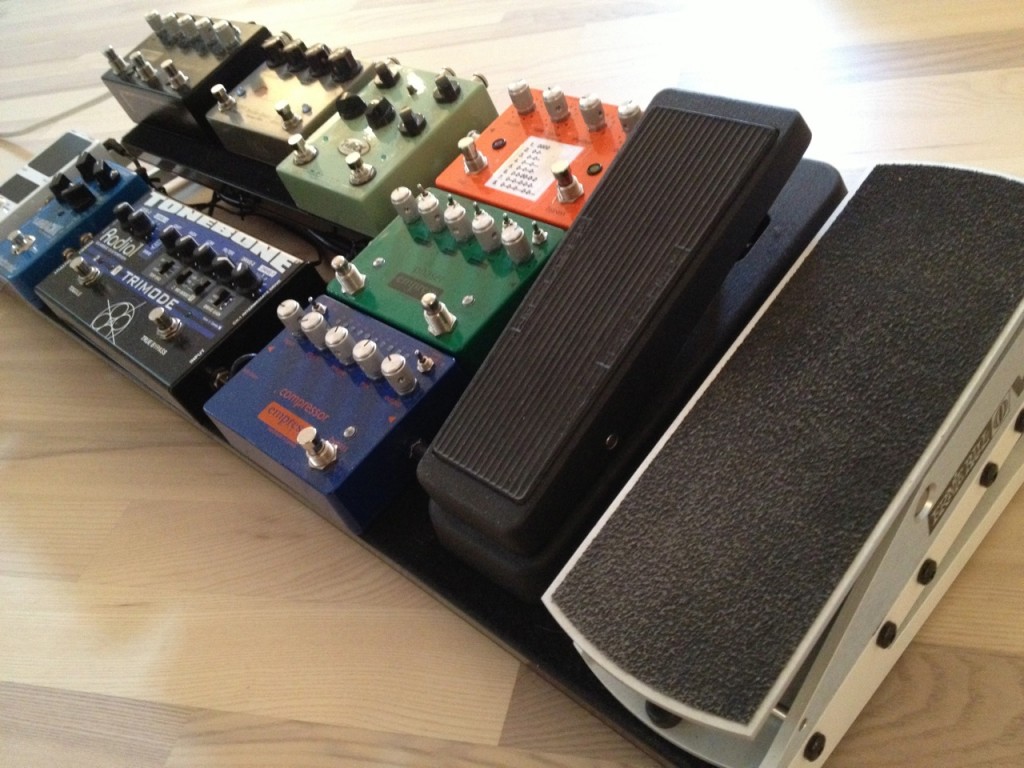 After some weeks I was ready – I had decided what board I wanted to mount everything at, and started doing that. I had bought some instrument cable that have been recommended by many people and a power supply that should be able to deliver all the power I needed.

When everything finally was connected and I turned the power on – I was disappointed. There was a hum … not very loud, but annoying.

At first I thought something was wrong with the instrument cables, but after messing around with that, I realized everything was ok in that department. Some friends recommended me to swap the order in the way the pedals were connected to the power supply. It changed a little but the hum didn’t disappear. Since it helped a little I thought it was a matter of keep moving the order around, but after a while I realized that it didn’t solve the problem either.

When I was gigging I also realized that the hum was more that discrete. It was definitely noticeable, and a pain in the … everytime my set-up was mic’ed up thru a PA system – what to do?

I asked the guy, Lars Vad, who repairs my amps and guitars and he recommended a power supply by Cioks. I checked their site – found the Cioks Pussy Power supply together with a lot of information … a lot of technically stuff that I didn’t really know the exact meaning of – but when I read about the isolated sections I knew I was moving in the right direction, because another friend of mine had just mentioned that as a really important issue.

I couldn’t stand the hum any more, so I bought the Pussy power … not because of the wild color or the funky name, but because of the isolated sections and the fact it could deliver power for everything I used: 10 outlets with 8 isolated sections. I could even get 15volt for my Tonebone, and 12 volt for some of the other stuff and then 9 volt for the rest. If I had needed 18 or 24 volt, that was possible too – very nice! And it works with 120 and 230 Volt, so it’s a cool travel partner.

I got it, unpacked it, connected everything, with the cables that came along with it (actually there were many extra cables for things I didn’t need) and turned it on … at it was silent – actually I thought something was wrong because there was no hum, no hiss … nothing, so I hit a chord … whau … it worked – perfectly. And actually it sounded better that before. Not only was my board now noiseless – but my buffer got more power than the 9 volt that is minimum needed to run it, and it made it sound clearer and brighter – very nice!! 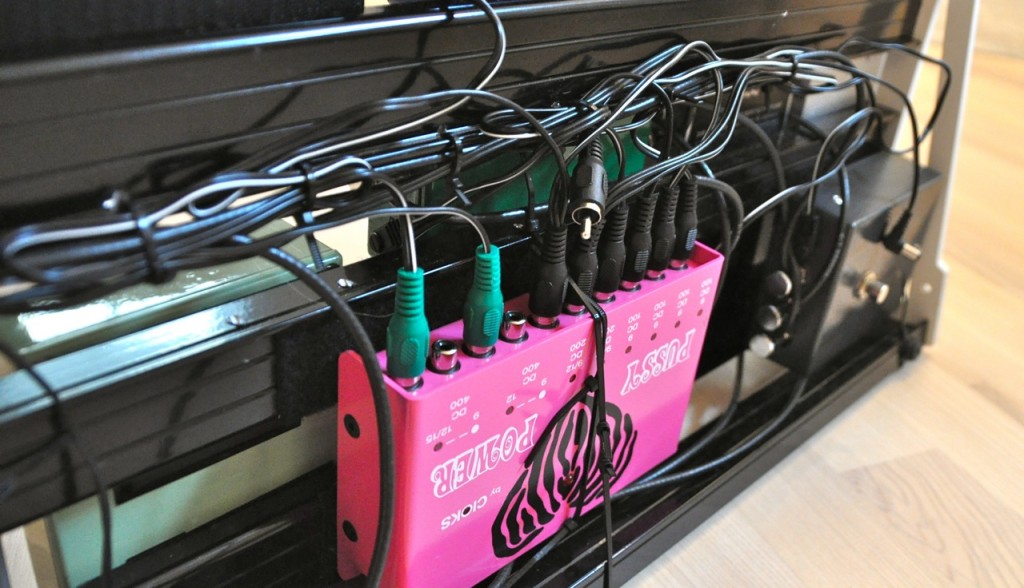 I had to swap a couple of pedals power order around, so pedals that need a lot of mA weren’t connected to the same section – when that was done everything worked perfectly and has done it ever since. And talking about hum and hiss … my new setup with 12 units on the board and the Pussy power, is actually more silent than my rack setup – impressive!

So to cut to the bone … If you’re looking for a strong powersupply you should definitely check out the Pussy Power … man it rocks!!!

If you want more technically stuff – you can read everything here at the official Cioks site.